"Listen closely to the music of Ainsley Matich and the Broken Blues, and you’ll hear raw poetry along with Matich’s accomplished compositions. 'I don’t like using the same phrases that other people use, so I try to come up with new ways to say the same old things,' says the band’s front-woman. Along with Matich on keys and lead vocals, the band includes Jonathan Solomon on bass, Joseph Boucha on drums, and
Andy Bower on baritone and tenor sax. Horn players, including Fritz Barrau and Jay Hagen on trumpet, and Jon Ramm and David Phy on trombone, rotate through. Matich, [Solomon] and Boucha formed the band nearly three years ago, and Matich says she has a hard time describing the group’s sound. 'We’re a blues band at heart, but we don’t always play strictly blues, and we don’t have the iconic blues guitar sound that so many people associate with the genre,' Matich says. 'There are definitely pop elements, inspired mostly by Motown and The Beatles; country elements, inspired by Johnny Cash and Patsy Cline; and big-band elements, inspired by Duke Ellington and Count Basie — but all rolled up together with honky-tonk and blues.'
Last month, the band released Ainsley Matich and the Broken Blues: The Album, its debut record of 10 original tracks. Matich is already working on the next album, and she looks forward to playing more around New Orleans in the coming month. She’s also sure of one thing: She wants to stay independent. 'It’s been a lot of hard work to put this album out on our own, but, because of that, we get to make all of the creative decisions,' Matich says. 'That can be a pretty rare thing in
this industry.'"
-Lianna Patch
New Orleans Living Magazine 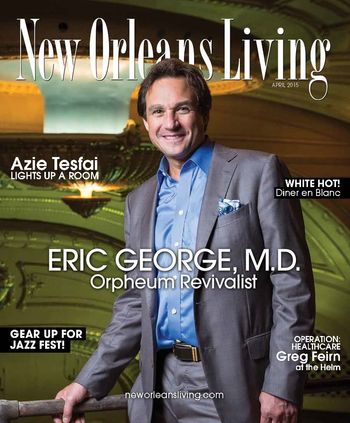 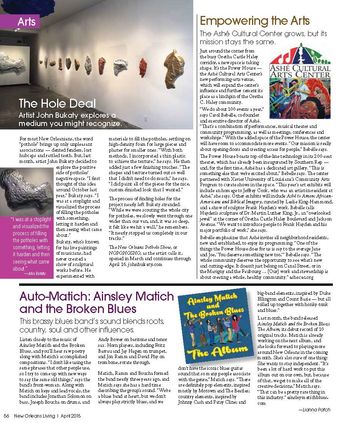 Ainsley Matich and the Broken Blues

It all starts with a lesson. Few musicians have their careers without one. For Ainsley Matich of Ainsley Matich and the
Broken Blues, her fire for music was lit as a child by a guitar lesson. She began playing when she was 5 years old, living
in Phoenix with her family. “I wanted to be a rock star,” Ainsley explained when asked what drew her to music originally.
Her passion started young and continues to grow in NOLA as the band plays local shows and builds their following
through original music described as “rock ’n’ roll blues pop.”

WYAT: What is your background musically?

AM: I dabbled in different instruments when I was young, and started playing the guitar when I was 5 or 6. I went to a
performing arts school, and my performing art was music, so half of my day was spent practicing. I played piano on and
off and also played the tuba. In 2006 I moved to New Orleans so I could go to Loyola while the school was giving out
scholarships, and I majored in Music Education. I got to meet a lot of new people who I’m still in contact with today.
After I graduated, I taught band and now I teach piano lessons while I work on different band projects.

WYAT: What came first for you: singing or the piano?

AM: I’ve always played piano on and off, but singing didn’t come until college. I haven’t always been interested in singing.
I wish I had taken up singing when I was younger because I feel like my voice might be stronger now. It can be
daunting being a musician here, but I want to do something completely different as a singer.

WYAT: You play keyboards as well as vocals. What is your songwriting process like?

AM: It really just depends on the song. Some are just waiting to be written. They can be based on personal experience,
but it usually starts with instrument improve. I just try to start playing music to see if it catches. I don’t usually start
with lyrics; it’s more of a concept.

WYAT: How did the “Broken Blues” part of the band come about?

AM: I met Joseph and Jonathan while doing another band project, and once that fell apart I really wanted the three of us
to keep working together. At first I thought we might need a guitar, but I feel like the sounds sort of clash and now we
have a saxophone and a full horn ensemble. This feels like my ideal band.

WYAT: What does “Broken Blues” mean?

AM: Jon was the one who started that; he was the creative force throwing out ideas but we were going back and forth
on it. Originally I thought we would just have a band name, but because I do vocals and keyboard we went with Ainsley
Matich and the Broken Blues. It can be hard to come up with something that can describe your band in about four
words. The name just has a good flow and I think it’s a good way to communicate what the band is about.

WYAT: What is your favorite thing about being a part of the local music scene in New Orleans?

AM: It can be daunting to be a musician here. It can be frightening but also inspiring. There are lots of opportunities for
all sorts of music. It feels like more of a community here. I’m not looking to compete; I’m just looking to be a part of the
conversation.

WYAT: Was music the reason you stayed in New Orleans after college?

AM: It was a big part of why I stayed. This is a good place for a musician.

WYAT: What can you tell me about your album? What was the process for finishing it?

AM: I was involved in a reggae band and through that I met someone with his own studio, which is where we recorded
the album. I had no reference for it. I’ve met so many people here in New Orleans who are involved in music and I was
thinking that if they can make and album, then so can I. The hardest part was working with rehearsals and figuring out
everyone’s schedules. Sometimes we were pulling 8 to 10-hour days. I learned a ton through the experience, though.
Without New Orleans, I wouldn’t have had the confidence to make the album.

WYAT: Do you ever find it nerve-racking to share your songs?

AM: Oh, definitely. Even now, I sometimes have self-doubt. Getting started was especially nerve-racking. I was doing
lots of open-mic nights but you have to be okay with sucking for a while. I’m still working hard on my voice.

WYAT: You have a background in teaching and now you teach piano lessons. How do you balance teaching with music?

AM: I thought for a while that teaching was what I would do full time. But what I have now is the perfect job for me; I’m
really lucky. It leaves time for morning work and gigs and practicing. I have a flexible schedule and I love teaching.

WYAT: You’ve had a lot of local gigs this summer. What has that meant for the band?

AM: We’re definitely building more of a following. We’ve played the AllWays Lounge and Dmac’s and a few other places.
I love playing in different parts of the city because it means that we can play to different crowds. I like getting to introduce
new stuff, too. We’ve played on Frenchmen Street and its’ great because between sets of our shows we can walk
into any venue and hear good music.

WYAT: What is your overall goal as a musician and for the band as a whole?

AM: For me, success will mean people enjoying and sharing the music and being able to make a living off of it. I would
like to make three albums in three years, too. I’m just lucky to be working with the musicians I get to work with. The
band clicks so well and I like seeing it grow. I think we now have the momentum to keep going.